n this post I reflect my experiences. In contrary to Simone I just stayed for three days, she arrived a couple of days before. Despite my short stay I’ve experienced many new things. I almost felt like an adventurer. 😀

What was my first impression?
The first moment: I was shocked. Even though the airport in Mombasa was a small one, it felt like a huge new world. Many people talked to me and wanted to carry my luggage or offer me their taxis. There were so many new impressions that I felt nothing but confusion.

The first hour: The cab ride from the airport to the hotel took about one and a half hour. The area around the airport was very dirty, because of an huge construction site and the adjoined slum. My first thoughts were: „This is Kenya? How can I stand that?!“ But after half an hour and a lot of traffic we left Mombasa behind and drove through rural areas. They were beautiful – very green, less traffic, a couple of cows, goats and sheep at the roadside. And now I thought: „So, this is Kenya? It’s gorgeous!“

Which difference did I detect?
Most of the differences between Germany and Kenya were apparent. Like the huge amount of garbage you can find everywhere in Kenya. As they have no deposit system, everywhere are empty plastic bottles (and also plastic bags and kitchen slops and so on), even in the rural areas. If there is too much garbage in front of the houses, the people simply combust it, which causes awful smelling fumes.

Another not-german-like thing I saw were the small busses, particularly in the city. They are a kind of urban busses, but the people enter or leave the busses, whenever it comes to a stop. Even on gigantic crossroads with a lot of traffic lights. Sometimes that looked a little bit reckless.

Of course there were a lot of other differences like the food or the streets, but the most remarkable difference makes the behaviour of the people. Everyone is so nice and friendly. It’s almost too friendly. As a german I wasn’t used to that, so I was surprised in the beginning. But after a little acclimatisation it was really fun talking to complete strangers as if you know them. 🙂 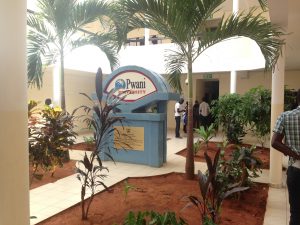 A further differnce is the living with animal. In Germany we love our cats and dogs and sometimes even birds. In Kenya the people also live together with animals, but they are no pets, they are farm animals. You can see everywhere (especially in the rural areas) goats, chickens and cows.

How did I manage the differences?
The differences were at first glance a surprise, sometimes even a shock. But I always tried to be open minded and that worked. I just let things come up to me and lived in the moment. Of course the gorgeous people made it really easy for me to cope with all the differences that might have shown up.

What was a real success?
Our initial intention for the trip to Kenya was to establish a cooperation between the Pwani University in Kilifi and the Hochschule Karlsruhe. To enable this cooperation, we had two meetings with professors and other persons of the university. After the second meeting we already had a plan for the project including important milestones and the necessary work steps.

So I can say, the whole trip was a real success!

What was a surprise?
When Simone and I went for a walk through the nearby town Mnarani, school was over for that day. So many children were on their way home. When we passed they greeted us very friendly (and loud) and they asked us for sweets. Some of them wanted to hold our hands.

Another surprise was our presentation at the Pwani University. Although we presented our work to professors and even a dean, they took us very seriously and honored our work. That was a great feeling! They even discussed our work.

But what surprised me most was the fact, that some people like the hotel staff were really thankful that we came. They said that tourists and people on business trips are necessary for the region around Kilifi. Most of them wanted to know why we came and some asked us to come again and bring some friends. 🙂

What did I fear and how turned it out?
When I still was at home and thought about my upcoming journey, I was afraid that I would be exposed as a tourist and droll thing. In fact it was like that but not with an awkward feeling. Most of the people were friendly interested. They wondered what we did there and where we came from. The children greeted us and wanted to hold our hands.

However there was one awkward thing, that made me feel uncomfortable. While we went to the kindergarden in Mnarani, we passed a woman with a baby on her back. As the baby saw my face it began to cry. I can’t say if the baby or I was more shocked… 😀

What did I learn?
The most important thing I’ve learned is that normal conditions are subjective. I was shocked about some things, like the waste and the little fires everywhere (caused by burning waste). But for the people living in Kenya it’s totally normal. It’s their everyday business. But I’ve learned to look behind these things and see the beauty of Kenya instead. 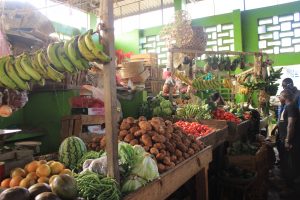 Another thing I’ve learned it that you get to know the real Kenya just if you have a guide. Otherwise you just will experience the polished up areas for tourists. The best example was the food market hall in Kilifi. We asked our guide where to get some passion fruits and he took us to that place. It was amazing and absolutely astonishing, but we would have never found it without him. 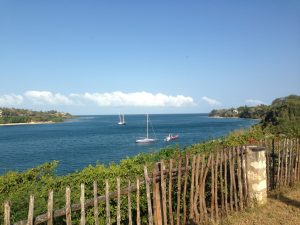 Which competencies did I win/improve from the excursion?
The best thing I’ve gained through the excursion was a huge amount of self esteem. I didn’t had that much time to prepare the presentation with Simone at Pwani University. On top of that I had to talk to complete strangers in english – not my mother tounge. But Simone and I managed the presentation and I think we did a good job. We reached our audience and they seemed to be interested. I’ve learned that there is no need to be nervous if I have to perform something in a foreign language.

What was my greatest experience?
My greatest experience in Kenya was the food market. The tiny hall was only for fruits and vegetables. However it was stacked to the roof. It was crowded and narrow. I really liked it there because of the local fruits, which were exotic for me. Every market stand sold coconuts for example. 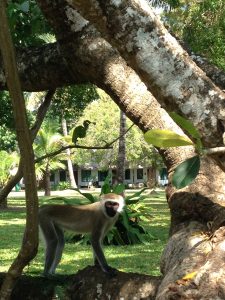 Would I recommend a trip to Kenya?
YES! 🙂 It was great. Although I just stayed a couple of days, I’ve seen so much new and impressing things. If you have the chance to go to Kenya, you should definitely do it. You won’t regret it!